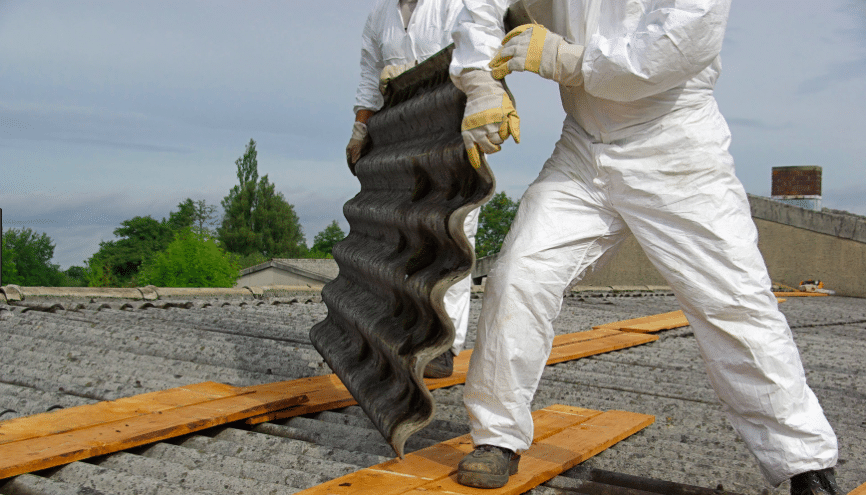 Up until the late 20th century, asbestos was used as a building material and insulator around the world – until it was discovered to be a deadly carcinogen.  Use of asbestos in building was phased out around the world, but that leaves millions of buildings that still contain asbestos.

If you own a property that still contains asbestos, it is a genuine health threat to anyone nearby.  You need an expertly-trained asbestos removal service for inspection and remediation to prevent hazardous situations.

The Dangers Of Asbestos

The harm that can be done by asbestos is hard to overstate. Asbestos is a naturally-occurring mineral, made of tiny silica fibers that almost look like cotton.  There are six known types of asbestos, although Chrysotile, the ‘white asbestos,’ is by far the most common.

Asbestos is soft to the touch, but at a microscopic level, the silica fibers are more like tiny knives.  Once inhaled or ingested, they end up trapped in the body – especially the lungs – doing ongoing damage potentially for the rest of a person’s life.  In particular, exposure to asbestos can greatly increase risks of developing lung cancer, as well as other cancers.

Despite growing knowledge of its dangers, asbestos use has never entirely ended in the United States.  Millions of Americans continue to come into contact with it.  As a result, tens of thousands of people still die every year from asbestos exposure.

Asbestos should be banned in the US, but until that happens, responsible property ownership means eliminating any asbestos that may still be in use.

Where Asbestos Is Typically Found

At its height in the mid-20th Century, asbestos was used in thousands of products.  It could be found in:

In short, if you own a building that was built prior to 1980, it’s virtually guaranteed to still contain asbestos.  Many buildings built after that may contain asbestos as well, although use has become far less common in recent years.

Testing And Inspection For Asbestos

Under Federal law, any activity which might release asbestos into the atmosphere, such as demolishing or renovating an older property, must first receive an asbestos inspection.  A thorough inspection should be conducted by a reputable company with training and licensing in dealing with asbestos. ACM has been integral in asbestos remediation and safe removal for over twenty years.

The inspection begins with a visual overview.  Asbestos experts know what areas in buildings are most likely to contain it, and which products to look for.  Then the inspectors make an inventory of all suspected materials, and take several samples from each item.

These samples are then set to a lab for testing and analysis, to determine whether asbestos is present and, if so, how much.

The survey itself can take as little as a few hours, for a small isolated building such as an old garage, or potentially days for a larger property.  The samples take around 7 to 10 days to be analyzed.  Then, at the end of the process, the inspector will deliver their report along with recommendations for removal.

Removal And Disposal Of Asbestos

Only highly-trained experts with the proper safety gear should ever attempt asbestos removal.  Should you discover asbestos in your own property, do not go near it, and keep others away.  If possible, isolate the room from any ventilation as well, to prevent it escaping into the building’s atmosphere.  Then call in the professionals at ACM.

The exact process of removing the asbestos will depend on what form it’s in.  However, expect the area to be completely sealed off and airtight, while we work on safe removal and containment.

Along with physical removal, we also utilize high-powered air filters to remove any asbestos which may become airborne during the process.  At the end, you’ll have a space which is entirely free of asbestos.  We’ll handle all the follow-up, destroying the asbestos in a safe fashion which prevents any chance of further contamination.

Protect Yourself And Your People From Asbestos

Contact ACM to handle your commercial and residential asbestos inspection and removal. With over twenty years’ experience in handling this hazardous material, safety is our top priority, and we will keep you fully informed of our plans and methods throughout the removal process. Don’t let anyone on your property be endangered by asbestos.  Contact ACM for expert asbestos removal for projects in New Hampshire, Massachusetts, and southern Maine.

We believe in safe performance of the important task of removing harmful waste both residential & commercial properties to keep communities clean.